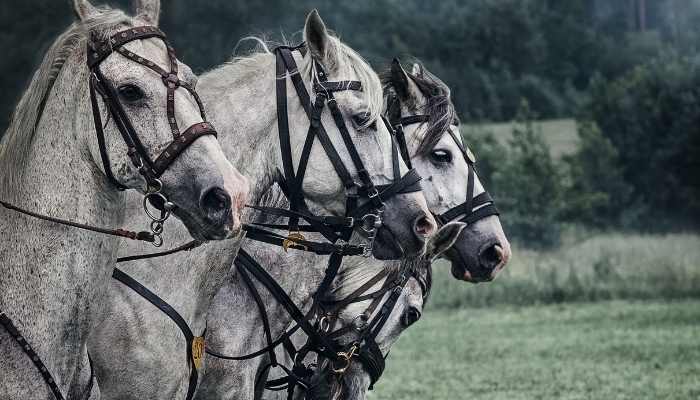 The role of war horse breeds is largely unrecognized and their heroics are forgotten. Carrying the warrior fearlessly into the battlefield, leading the cavalry charge, and transporting the troops were some of the duties performed by the war horses.

They supported their soldier through thick and thick, freezing rain, searing heat, and shellfires. They saw their fellow horses perish with exhaustion, deadly wounds, and starvation. They share the burden of enduring hardship and witnessing horror with the soldiers. Bred for being strong, speedy, agile, and alter, the war horse breeds contributions to the war is no less than the humans.

Some of the war horse breeds are discussed here

Arabian horses are the most popular horses in the horse world. This horse breed, rich in history and heritage, is celebrated for its stamina, strength, intelligence, and grace. Many breeds have Arabian genetics in their bloodlines. Their contributions to many historical events are honorable. They were traded for work and war owing to their willingness to work, and their courage to take the warrior into the battlefield.

The history of the Arabian breed dates back to 4500 years. Many oldest breeds became endangered or got extinct but the Arabians never fell out of demand.

Speed, alertness, endurance, and intelligence are the desired traits of a warhorse. Arabian horses were bred to have all of them.

The most recognizable feature of the Arabian breed is their dished faces and high carried tails. Other distinctive features are a refined wedge-shaped head, broad forehead, large eyes and nostrils, small muzzle, laid back shoulders, level croup, and standard correct equine conformation.

Akhal-Teke is considered one of the most handsome horses in the world. It’s not just their beauty they are known for, their speed, agility, endurance, soundness, and intelligence also give them recognition. These Turkmenistan war-horses are well ahead of several breeds in beauty and stamina. They held the horse lover’s heart captive when seen glimmering with gold in the sunlight.

The historians name many ancestors of Akhal-Teke, the topic is still open to debate. Some consider Nissan horses to be the ancestors whereas some believe they are the descendants of the Turkoman horse.

The journey of the Akhal-Teke from an ancient warhorse to a now pleasure riding horse was not a smooth sail. From several war tragedies to being endangered, the Golden horse has seen it all. There are many monuments of the Akhal-Teke horses in remembrance of their contributions to the war.

Akhal-Teke, a horse with a unique metallic gleam, has quite a few distinctive features that stand him out from the crowd. The Akhal-Teke has a small refined head with almond-shaped hooded eyes and long ears.

The average height of Akhal-Teke ranges between 14.2 to 16 hands tall.

Desirable colors for this breed are Golden buckskin and palomino. Other common colors include bay, grey, black, and chestnut.

Budyonny or otherwise known as Budenny or Budennovsky is a warhorse breed originating from Russia. The modern Budyonny horses resemble Thoroughbred because of their sturdy build and strong bone structure. Budyonny horses are brave, loyal, agile, spirited, mild-mannered, and energetic. There are three main intra-breed types of Budyonny are

Byddonny is not an old horse breed rather they were developed in the 1920s. They were bred after the Russian Revolution as a military horse.

The all-round Budonnys are versatile and adaptable horses bred to survive the cruelest conditions without human help. To compensate for the loss of horses following the fall of the Tsar, Budonnys were bred.

Budonny mares, on average, are 16 hands tall, whereas, Budonny stallions have an average height of 16.1 hands. The common coat color of this breed is chestnut with a golden sheen. Other color includes black, bay, and grey.

Waler is an Australian horse breed, influenced by other breeds in their gene pool like a thoroughbred, Timor pony, Arab, and Cape horse. Evolved into hardy horses with immense strength and endurance, Walers were prized as a military remount. Walers performed cavalry duties and their gait was deemed best for the cavalry mount.

Their name is the reflection of their place of origin, New South Wales.

Walers were the backbone of Australian Light Horse mounted forces and fought many wars heroically. Walers became the talk of the town because of their unmatched abilities to carry out cavalry duties. These cavalry horses impressed everyone with the courage they carried the rider into the battle.

This warhorse breed is well known for their intelligence, bravery, and loyalty. Alert eyes, refined head, strong neck, rounded back, deep hindquarters and girth, and fine tail are the common features of Walers.

The average height of Walers stands between 10 to 17 hands, whereas, the height of most Walers lies between 14.2 to 16 hands.

The common colors of Walers are black, bay, brown, chestnut, and gray. Some Walers are also seen in roan, pinto, buckskin, palomino, taffy, and dun colors, though it is rare.

The Nisean or Nisaean horses were considered the sacred breed in the Achaemenian Persians. The now extinct breed originated from the Nisaean Plains in the southern region of the Zagros Mountains, Iran. Chinese called these horses Tien Ma meaning Heavenly Horse or Soulon-Vegetarian dragon. The Nisean was considered the most beautiful horse alive and used to pull Shah’s royal chariot. They fought numerous battles along with many great emperors.

The origin of the Nisean breed is lost to time as their history goes back to 430 BCE.

Nisean horses were loved by many royals, they fought many invasions together. These loyal horses stood by their emperor’s side through thick and thin. There are many historical events that witnessed several victories by Nisean.

Extinction of the Nisean breed happened in the year 1204 with the conquest of Constantinople.

As many writers and emperors have written, Nisean horses were the most beautiful horses alive.

They had a robust head which is considered a characteristic for a great warhorse.

There were spotted and solid horses in the breed. Tall and swift Nisean horses had a very smooth gait.

As Nisean was an ancient breed, the size of them is not certain.

The Don horses are known for withstanding the extreme conditions perfectly. Their endurance has been tested several times through long-distance rides and their ability to withstand freezing winters and searing heat. Robust-natured Don horses with a high level of endurance and stamina hold a record of covering 2400m in a time of 2 minutes 43 seconds in flat races.

The history of the Don breed goes back to the 16th century but they were not in demand until the early 19th century.

Though little is known about this breed abroad, they were a famous cavalry mount in Russia. They served the military and fought many battles alongside the soldiers.

The average height of Don horses stands anywhere between 15.2 to 16.2 hands. They weigh around 1700 pounds.

The Turkoman horse or Turkmene is a mighty horse of the oriental horse breed, having the characteristics of both race and warhorse. It is believed that the purebred Turkoman horses are now extinct. This all-round horse breed is popular among horse lovers because of their stamina, fast speed, and have fewer health issues. The confirmation of the elegant, tall horse fits that of a warrior horse. These four breeds are considered Turkoman strains

The history of Turkoman dates back to the 16th century. They are crossed and developed to become a more refined breed. Their contributions to the gene pool of other breeds are honorable.

Turkoman has its name written in gold when it comes to helping warriors in war. They were used by the tribes of Turkmen for war. The breed was exported to other countries to serve the soldiers.

Though they are recognized for their glistening gold coat, there are some other traits that make them a great warhorse. Well-proportioned head with a straight profile, long, sloping shoulders, long back with sloping quarters, tucked up abdomen, and muscular legs.

Turkoman, on average, stands between 15 to 16 hands tall.

There were some warhorses whose contributions to the war got them in the spotlight. Some of these horses were

No one can deny the support provided by the warhorses to the soldiers on and off the battlefield. Standing fearlessly in the face of the enemy’s fire where the death was almost certain, the war horse breeds have served the warrior with utmost loyalty. Their contributions to the war often go unlauded and their losses are sold short. Nonetheless, their bravery and loyalty to the soldiers are beyond all descriptions. The saying ” History was written on the back of the horses” could not be more true owing to the substantial role of horses in the historical events.

Hi, I am Waqar and active in the horse world since 2012. I have MSc (Hons) in Agriculture from the University of Agriculture Faisalabad. I love to solve equine health care issues and note down in the form of research papers.

I have written hundreds of equine health care, accessories, names, and history-related blogs. My equine related work is watering a lot of horse-related magazines and blogs.