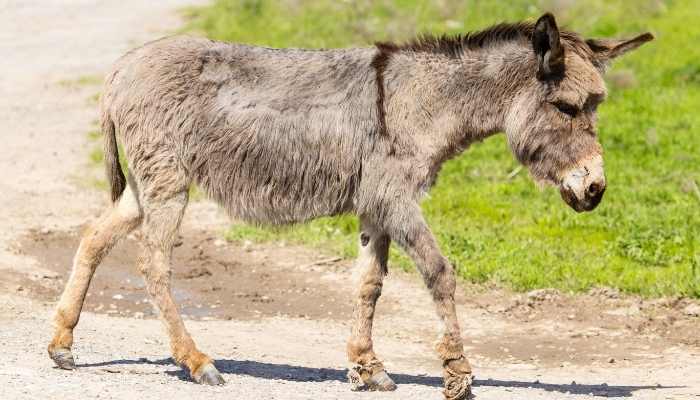 I did not know much about the cross on the donkey’s back, frankly speaking, I never bothered to know but all these questions that I have been getting lately my soul wants some answers. I wanted to solve this mystery once and for all, so I went on a quest to find some answers.

I met breeders, asked local farm owners, did some online research, it took me a good day or two to reach a satisfactory conclusion. I enlightened my kids, neighbours, and friends about the cross on the donkey’s back. Since I told everyone about the cross, I decided to keep our readers in the loop too. So, without further ado, let’s get right to it, enjoy.

Do all donkeys have a cross on their back?

Regardless of where the donkey hails from or who it belongs to, either Jerusalem, Christ, or Easter, they have one thing in common, a cross of dark hair on their back.

Cross on Donkey’s Back

Cross on a donkey’s back is defining this naive creature’s appearance to a large extent. Cross on the back of the donkey is shaped like a narrow strip of dark hair that runs down the spine and across the shoulder.

The strip of hair that makes up a cross on the donkey’s back carries darker hair in comparison with the rest of the coat.

I bet the moment you read do all donkeys carry the cross on their back? You must have gone back to your childhood days and recalled a story. A story about a donkey that was a Jesus mount.

A story that begins when Jesus made a triumphal entrance to Jerusalem riding on a donkey colt, before his crucifixion. The little donkey wanted to help and carry the cross for Jesus but it couldn’t reach up to him because of the crowd. When the crowd disappeared, he stood by Jesus, the sun went down and the shadow of the cross got itself imprinted on the donkey’s back.

To reward the donkey for his love for Jesus, the cross is still there for the donkey to carry forevermore as a sign of love and devotion.

This story is a part of Christian storytelling for thousands of years, however, this tale never appeared or was authenticated in the Bible. Donkey being a part of more than one Christian prophecy is one of the two lucky animals that were mentioned in the Bible, the other one is Serpent.

Scientific Interpretation about cross on donkey

In the scientific realm, things are always less symbolic and fiction-like. You get practical answers to all your whys and hows. Let’s tell you Why do donkeys have crosses on their back.

Putting aside religious myths and cultural symbolism, it’s time to tell you what science believes. Researchers are of the opinion that the cross on a donkey’s back is caused by a similar gene that is responsible for camouflage color in modern horses.

Donkeys have been part of society for thousands of years. In this period, there are a lot of modifications happened in the genetic makeup that resulted in the cross on their backs. Crossing with different breeds also plays a significant role in the change of genetic makeup.

Claire Wade, professor of computational biology and animal genetics at the University of Sydney believes that donkeys, zebras, Kulan, and horses shared the same ancestors, however, they got separated from each other around 3 million years ago. So, striping or cross may be a parting gift from the ancestors or the only sign that is a testimonial to happier old days when Zebras, Horses, and Donkeys were together.

Do donkeys have a cross on their back since birth?

Yes, they do. Cross is not just a mere marking that magically appears after a certain age. From the moment of their birth till the day they die, donkeys carry the cross all their lives.

Concluding from multiple research and scientific writings, newborn donkeys are born with a cross on their backs.

When the cross sign on the donkey’s back is seen in religious prospect, many Christians believe that it comes from the legendary Jerusalem donkey. The one Jesus rode on and rewarded him with a cross for loyalty.

Other Animals with Cross

It’s not just the donkeys that are bestowed with the cross, there are other animals as well who carry the cross, however, the visibility of the cross is more clear on the donkeys. Other animals with a cross are wild bears and Okapis.

What kind of donkeys have a cross on their back?

Almost all donkeys carry cross signs on their backs but Nubian donkeys are credited for introducing this genetic modification as the donkey that took Jesus to Jerusalem was a Nubian.

What did the donkey represent in the Bible?

The donkey is one of the two animals that are mentioned in the Bible. In Biblical works, Donkey represents service, suffering, humility, and peace.

What does a cross on the donkey’s back mean?

In religious prospect, it’s a shadow imprinted by Jesus on the donkey as a gift to its devotion. In the scientific realm, a cross sign appeared because of the similar gene that caused camouflaging color in modern horses.